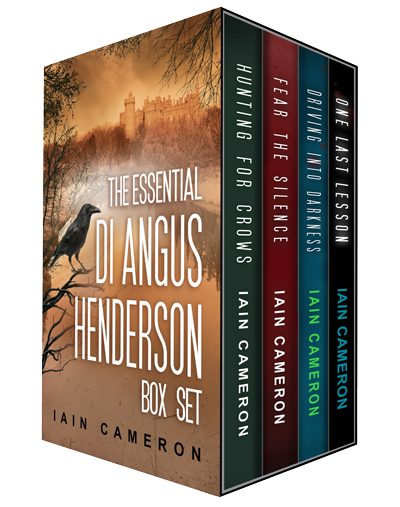 The first 4 DI Angus Henderson novels in one place

The Scot at Sussex Police is often described as having a calm nature but with a ruthless streak where criminals are concerned. His dogged determination to get to the truth often gets him into trouble with his bosses and the press but it’s a risk he is willing to take.

The body of a popular university student is found on a golf course. DI Angus Henderson hasn’t a clue as the killer did a thorough job. That is, until he finds out she used to be a model on an adult web site run by two of her lecturers.

A gang of car thieves are smashing down doors and stealing the keys of expensive cars. Their violence is escalating and all are fearful they will soon kill someone. They do, but DI Henderson suspects it might be cover for something else.

A missing woman is not what DI Henderson needs right now. She is none other than Kelly Langton, once the glamour model ‘Kelly,’ and now an astute businesswoman. The investigation focuses on her husband, but then another woman goes missing.

A man’s body is recovered from the swollen River Arun, drowned in a vain attempt to save his dog. The story interests DI Angus Henderson as the victim was once the member of an eighties rock band. When another band member dies exercising in his home gym, Henderson investigates.