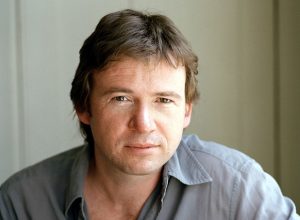 It’s 10 years since David Nicholls’ novel One Day became a publishing phenomenon – a word of mouth sensation that has sold more than five million copies around the world. Five years later came Us and now five years after that he’s back with a new novel. But can he repeat the success with Sweet Sorrow – a story of falling in love for the first time?Nicholls is under no illusion that whatever he does next, a book he wrote a decade ago “will always be the most popular and successful thing” he is known for.

One Day was a phenomenon that not only sold five million copies around the world but was also made into a movie starring Anne Hathaway and Jim Sturgess. But its story that followed two characters from their graduation to their early 40s by visiting them every St Swithin’s Day, cast a long shadow, says the author.”The success of One Day made it very hard to write,” he tells BBC News.

“Every time I sat at my desk I thought, well this isn’t as good, this isn’t as funny… it isn’t going to sell as many copies. Finally though, he thinks he has written a “better” book. It is called Sweet Sorrow and it is a coming of age story about finding one’s first love. It’s Nicholls’ fifth novel. The others, along with One Day, are Starter For Ten, The Understudy and Us. But despite his considerable experience, he found writing Sweet Sorrow “completely terrifying.” “It doesn’t get easier with each book. I don’t feel any more confident now than when I started. You’re revealing part of yourself. You’re drawing on something from deep inside and that’s exposing.”

Sweet Sorrow is narrated by Charlie, a man in his 30s looking back on a single, life-changing summer, when he was 16. Nicholls said he wanted to “try and remember how it felt at 16, try and capture that on the page, the kind of dizzying excitement and confusion of it all”. But Nicholls is 52 and admits he was “anxious about authentically portraying what it feels like to be 16”. “I mean it’s a long time ago and I’ve always thought the further you get away from your childhood, maybe the more distant you feel.”

Nonetheless, although he has never kept a diary, he says he has a “vivid recollection” of that time in his life. “It’s tough, it’s difficult, you feel lonely.” Not that he was a rebellious teenager. “I was quite a kind of nerdy, disciplined, conservative kid. I wanted to get really good exam results. I wanted to do well. I was very rarely badly behaved. I was pretty diligent.” The novel also explores mental illness. Charlie’s father has depression and the book examines the impact on both of them.

“The book isn’t particularly autobiographical but it’s extremely personal and heartfelt,” says Nicholls. “You draw on things that you feel very profoundly and personally and things that affect you very strongly, without recreating anything from real life. So there’s very little in the novel that actually happened. But there are lots of things in the novel that preoccupy me, that occupy my thoughts constantly.”

Sweet Sorrow is set in 1997- a time when “no one was really prepared to name and face up to and deal with” depression. Nicholls thinks that “is many people’s experience then and now. Now I think people are much more open to talking about their mental health… and there’s less of a taboo,” he adds. Nicholls knows he is “lucky”. He has enjoyed the kind of success that most authors can only dream about. His books have been published in 40 languages. His novel Us, the follow-up to One Day, was longlisted for the Man Booker Prize.

He is also in demand as a screenwriter. He won a Bafta for Patrick Melrose, his adaptation from the novels of Edward St Aubyn, starring Benedict Cumberbatch. He has written the screenplays for most of the film adaptations of his own novels, including One Day and Starter For Ten. And he is currently adapting Us for a four-part BBC television series, which starts shooting later this year. But if there is a film of Sweet Sorrow, Nicholls is determined that he will not be writing the script. “I’m at the stage now where I’d love someone else to do it because adaptation involves a certain amount of violence… you really don’t want to take the kind of drastic action that’s required to make it work in a different medium.

“You don’t necessarily have the objectivity. Often you’re drawing on your own memories and experiences and so you can’t see clearly enough to make the kind of cuts and changes that are required. “And so my hope is that I will never adapt another of my own books.” He says it is also “time consuming” and distracts him from writing novels. “I’d love to write more fiction.” There is only one problem. “I just don’t have any ideas… I’ve said everything, there’s nothing else left to say.

“But I hope soon… there will be something else.”