When I finished reading Anne Cleeves’s book, Black Raven, it got me thinking. Why doesn’t the place where I live and set my DI Angus Henderson novels, Sussex, have a major celebration like Up Helly Aa? This is the annual Viking celebration on the Shetland Islands, a colourful parade through the streets of Lerwick and the ritual burning of a Viking boat on the shore. Such a large and public event would not only be a wonderful background for a novel, but it would also become one its main characters. Then it hit me. The annual Bonfire Night celebration in Lewes.

Guy Fawkes and his confederates, as every British schoolchild knows, tried to blow up the Houses of Parliament in 1605, in a plot to kill the protestant King James I and restore a Catholic monarchy. On the anniversary of the plot, 5th November, Britain celebrates this event with fireworks and bonfires, and hard to believe, this has been the case almost without a break since 1605. Nowhere is this celebrated with more exuberance than the Sussex town of Lewes.

Nestling under chalk cliffs, Lewes is an archetypal Sussex county town with grey stone buildings, narrow streets, an austere Victorian prison and the remains of a Norman castle. The town is nowhere near as brash as its westerly neighbour, Brighton, and doesn’t resemble a holiday resort for the elderly like its easterly neighbour, Eastbourne With a population of less than 20,000, it’s a minnow compared to its two flanking neighbours, but punches above its weight by housing the offices of East Sussex County Council and the headquarters of Sussex Police.

On the evening November 5th and in front of over 80,000 people, the town comes alive with music and a long procession of pirates, Civil War cavaliers, North American Indians to name a few, each carrying lighted torches, dragging tar barrels and pulling a cart containing an effigy. Standing four to five metres tall, the effigies are often based on well-known politicians with recent events providing no shortage of material. Popular choices have included the Pope, Sepp Blatter and Jeremy Clarkston. Guy Fawkes also makes an appearance and once the procession is over, he and the statesmen and any irritating television presenters, are placed on a bonfire and set alight to whoops of delight from a boisterous crowd.

The procession, the costumes and the construction of the effigies are the responsibility of seven Lewes Bonfire Societies, a tradition harking back to the 1850’s. Fiercely protective of their identities and ideas, there is little interaction between them as all seven try to outdo the others by putting on the best show of the night.

When I first attended the celebrations, it wasn’t long since I’d moved to Sussex from Glasgow, a city where religious bigotry was prevalent, as epitomised by the city’s top football teams. At the ritual burning of the effigies at Lewes, I was astonished to hear condemnations of the Pope and Catholicism, but soon realised the revellers were merely mimicking the prejudices of 17th century England, and not trying to incite religion hatred among their audience. At least at that late hour of the evening, it is hoped the children who lined the streets to cheer the Bonfire Societies walking past are now safely tucked up in bed.

Read a synopsis of Night of Fire by clicking the Home page on this website. 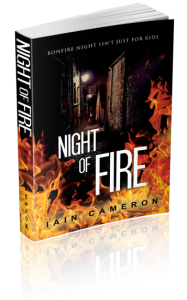